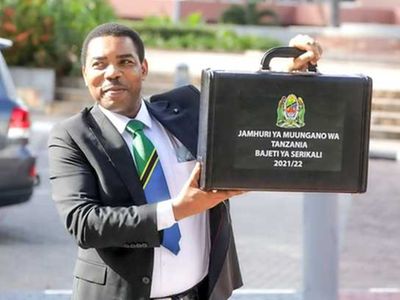 An estimated 8.1 percent of the new budget (Tsh2.96 trillion or $1.27 billion) will be covered by grants and concessional loans from development partners through either direct project financing or Basket Fund financing, and another Tsh7.34 trillion ($3.16 billion) will be borrowed from domestic and external sources on commercial terms.

Mr Nchemba described both as “mother projects for every Tanzanian” and emphasised that they will be completed.

In a presentation last month, the Ministry of Energy disclosed that Tsh1.4 trillion ($603.97 million) comprising 58.67 percent of its own entire budget for 2021/2022 would be channelled towards the dam project

The SGR project meanwhile is also moving along fast with President Samia Suluhu set to preside over the official launch of its latest phase involving construction of a 341-kilometre stretch between Mwanza and the Isaka dry port later this month.

Officials have confirmed that the government has already released Tsh376.34 billion ($162.35 million) out of the total Tsh3.07 trillion ($1.32 billion) donated by China earlier this year for the Mwanza-Isaka SGR stretch.

According to Mr Nchemba, a further Tsh3.13 trillion ($1.35 billion) has been allocated in the new budget to kick start another SGR construction project from Mtwara to Mbamba Bay in southern Tanzania.

He mentioned other government spending priorities in the new budget as including further strengthening of the national carrier Air Tanzania under a Magufuli government-sanctioned revival plan; commencement of the East African Oil Pipeline project; and resumption of negotiations for the establishment of a $30 million Liquefied Natural Gas plant in Lindi.

However, the final budget figure is only slightly above the Tsh36.23 trillion ($15.6 billion) preliminary estimate tabled in March and does not directly reflect a $850 million World Bank loan that was endorsed just last week as part of a budget support package.

Relief for traders as counties resolve to stop multiple levies

What was inspired by muratina grew into a million-dollar firm