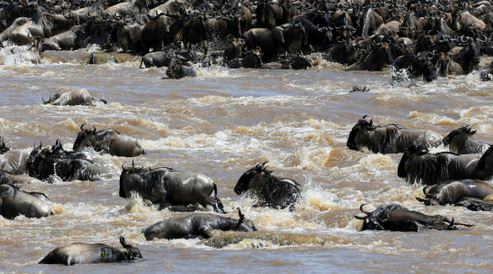 President Uhuru Kenyatta has expressed satisfaction with the measures being taken by stakeholders in the hospitality sector to protect tourists from Covid-19.
He said Kenya is ready to receive tourists and, encouraged local and foreign travellers to take advantage of the prevailing low rates to visit the country’s famous tourist sites.

“I want to take this opportunity to encourage every single Kenyan to take advantage and to travel…You can travel, you can move,” the President said.

“And now as you know, we have also opened up our skies and flights are coming. We welcome all those who choose to come,” he added.
He spoke at State House, Nairobi during a virtual meeting with elite Kenyan marathoner Eliud Kipchoge.
Kipchoge is Kenya’s new goodwill ambassador for tourism and is in the Masai Mara Game Reserve with his family to witness this year’s annual wildebeest migration.
The President urged Kenyans as well as visitors to continue observing the Covid-19 containment protocols saying safety is not a government responsibility but an individual choice.

“Safety is not really just a Government issue. It is an individual choice. To remain safe and by so doing, keep everybody else safe,” he said

SEE ALSO: All I wanted was to succeed in running and board a plane

The Head of State thanked Mr Kipchoge for choosing to represent his country as a ‘Magical Kenya’ brand ambassador saying the marathoner’s decision was an act of patriotism.
Mr Kipchoge said he was grateful to represent his country as a tourism goodwill ambassador and assured the President that he will do his best to promote the country as a top travel destination.
He encouraged Kenyans to visit the country’s tourist destinations saying Covid-19 should not limit people from enjoying the country’s tourist attractions.
The virtual meeting was convened by Tourism and Wildlife CS Najib Balala and attended by Narok Governor Samuel Tunai.

CS Balala thanked the Head of State for the Covid-19 stimulus package earmarked for the tourism sector saying part of the money will be used to directly pay rangers in conservancies so as to ensure the country’s conservation agenda remains on course.
The Cabinet Secretary said hotels in the Maasai Mara were fully booked for the current high season, mostly by local tourists, and encouraged Kenyans and foreign travellers to visit destinations across the country.
Governor Tunai said his County Government was providing free testing for Covid-19 to all service providers in the Maasai Mara Game Reserve so as to ensure the safety and wellbeing of visitors.