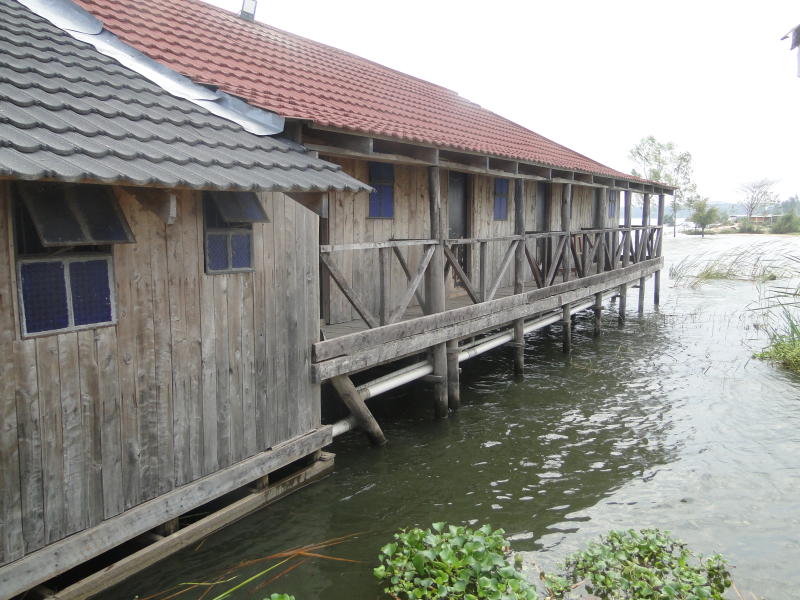 It was one of the beaches that every investor was eyeing to put up hotels, akin to those found in Mombasa because of the white sand and its countryside atmosphere.
An acre of land was going for between Sh800,000 and Sh1.5 million as locals disposed of their parcels to the investors.
Local tourists, instead of county-trotting to far away lands, discovered Siungu Beach in Bondo Sub-county.

Today, the hustle and bustle that characterised the beach has drowned as the increasing Lake Victoria water levels take a toll on business activities along the beach front.
Siungu beach, which is famed for the annual Got-Ramogi Cultural Festival, boat racing and swimming, is no longer accessible to visitors who enjoyed a perfect getaway to relax in a cooling breeze from the fresh water lake.
Crystal Charlotte, a hotel that had been tipped to be the landmark ‘Mombasa Raha’ in the countryside of Siaya, is now a shell.
The establishment’s rich flower garden and the rolling manicured lawns were all washed away. The chirping birds sound more lonely than enchanting.
The once attractive structures are now begging to be renovated.

Chris Mutuku, the proprietor, says the hotel is now marooned with visitors unable to access the facilities.
“Most of our customers who enjoyed the serene atmosphere, access and adequate parking can no longer do so because of the calamity,” he says, adding that they temporarily closed down to observe the situation.
Other than the hotels, youth who found themselves engaged as tour guides have now been rendered jobless.
“Most of us became tour guides or were engaged in bush clearing for investors who were setting up their businesses here but that is now gone. We have been forced to resort to other income-generating activities in order to put food on the table for our families,” says Evans Omondi, one of the area residents.
So dire is the situation that land owners, fishermen and sand harvesters are staring at huge losses due to joblessness.

George Otieno, who visited the beach every weekend with his family, says they no longer go there.
“The serene and tranquil environment just made the place an excellent break as it offered open water swimming experience,” he says.
In the last few months, the region has been experiencing backflows from the lake, with scientists attributing it to climate change as nature unleashes its wrath.
A recent study by North Carolina State University’s Department of Marine, Earth and Atmosphere Sciences in the US reveals that water levels in Lake Victoria will rise in the next 10-15 years due to changes in weather patterns as a result of global warming.
The university’s Director of Climate Fredrick Semazzi said the lake will replenish its waters at an almost unprecedented rate, which will result in its rise.
“The climate change projections indicate that we should expect an increase in rainfall around Lake Victoria. There is this dichotomy that the current decrease in rainfall is going to stop and an increase will be experienced,” he said.
Tourism potential
The research says that use of advanced meteorological tools alone will not be sufficient because there will be need to train experts on how to handle them to get credible climate predictions.
Martin Onyango, a resident who had foreseen a resort city coming up in Siungu Beach to exploit the rich tourism potential in the area is now a dejected man.
“Land prices around this place had started going up with investors thronging here to set up hotels. This is not possible now because of the kind of destruction that the lake has done,” he says.