The Sh3m donation by Kalonzo Musyoka to the Covid-19 fund has left tongues wagging with many praising him for being the first politician to make the gesture while others wondered where Kalonzo got the money from moreso given that he has not had a job for the last eight years. This even as there is talk that Uhuru Kenyatta will likely loosen restrictions on lockdown that will see people start attending church in safe positioning just like in eateries where their temperature will be checked. There have been claims that Kamba tycoon Peter Muthoka said to be one of the richest men in Kenya had a hand in the donation.

Muthoka last year funded a Kamba meeting hosted by Kalonzo at his Yatta home where he coughed out over Sh7m with each MP in attendance getting Sh100,000, MCAs Sh50,000 and the rest Sh2000 each. Before he left, Muthoka was seen handing Kalonzo a brown leather briefcase said to have had a cool Sh10m.Lately, Muthoka has edged out Kalonzo’s financier Johnson Muthama who now is no longer seen at Kalonzo functions. As a result, Muthoka has now become the face of Kambas in the high table of Kenya’s politics and commerce rubbing shoulders with Uhuru Kenyatta and William Ruto. Muthoka was the force behind Jubilee campaigns in Ukambani bankrolling MPs who were aligned to the party with millions. 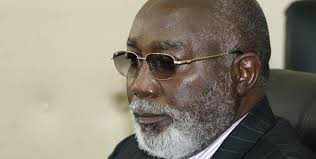 In fact, it is said that when former Kilome MP Harun Mwau went to court to stop Uhuru and Ruto swearing-in after they won the 2017 elections, it was Muthoka who made Uhuru not declare war on Kambas which saw Uhuru later appoint Kambas in his government despite the fact that one of their own had tried to stop him. It is against this background that Kambas are now feeling indebted to Muthoka who in a smart move has now turned his support to Kalonzo. Kalonzo had through his Kalonzo Foundation earlier donated foodstuff consisting of maize flour to those most affected by the virus. Kenyans in social media were quick to ask other politicians to copy Kalonzo’s example saying that had all politicians followed suit, the burden on Kenyans would be lessened to a greater extent.