In any given instance, there is no lender that has had as far reaching an impact in Kenya as Equity Bank. Over the past three and a half decades, the lender has not only evolved into one of the most profitable lenders in the region. It has also taken the lead position as the bank of choice for tens of millions of ordinary individuals and small businesses that were previously considered ‘unbankable’. This success may have seemed a farfetched dream when the bank was founded in October 1984. At the time, the bank aimed to provide mortgage financing. As has always been its philosophy, the bank targeted Kenyans who fell into the low income population. The bank has not looked behind ever since.

Today, the bulk of its customers are Kenyan in the small and medium enterprises sector, and the majority of population in the low income cadre. Over this time, the bank has become a beacon of profitability and an investment option for Kenyans looking to invest on its publicly traded shares on the Nairobi Securities Exchange. Its profitability journey goes back to 1994 when it registered its first profit before tax of Sh. 7 million. This has since grown beyond leaps and bounds, with the latest financial results, showing that the bank scored a profit after tax of Sh. 17.46 billion in the third quarter of the financial year 2019. In 2018, the bank posted an admirable full year profit of Sh. 28.5 billion.

Unlike the years when Equity had less than twelve thousand customers, the bank now boasts of over 14 million customers with deposits of over Sh. 459 billion. According to Nairobi-based financial analyst James Njenga, such a growth trajectory would not have been possible without a formidable back up of banking innovation, technology, and solution oriented products. “What we have witnessed is a growth centred on technological advancements that have been tailor made to suit the ‘mattress and piggy bank’ customers who were previously shunned by mainstream banks in favour of corporates and the upper working class,” he says.

Take the “Eazzy” digital banking solution that the bank launched in October 2016. This product made Equity the first bank in Kenya to fully pursue digital banking. The digital banking product includes Eazzy App and Online Banking. The all-inclusive Eazzy suite of banking products includes the Eazzy App banking application which is downloadable from mobile phones, an interoperable payment platform dubbed Eazzy Pay, the Eazzy Loan mobile-based loan platform, and Eazzy Chama which is designed to anchor investments and finance management of chamas in Kenya. Under its Online Banking product, the bank has established the self-service portal, Eazzy Net and Eazzy Biz. Under the Eazzy Net platform, customers are able to manage their bank accounts from the comfort of their mobile phones. When using the Eazzy Biz product, small and medium business owners are able to manage cash and liquidity.

The bank’s loan products that target small business owners have also been a major boost in the sustainability of small enterprises in the current tough economy. For instance, in September last year, Equity became the newest member of the SME Finance Forum, a global membership network that brings together financial institutions, technology companies, and development finance institutions to share knowledge, spur innovation, and promote the growth of SMEs. “Our vision is to be the champion of the socio-economic prosperity. Becoming a part of the SME Finance Forum touches on this vision, even as we learn of the latest innovations in SME finance and build our relationship management skills with global leaders in this industry,” said Mary Wamae, Executive Director of Equity Group on SME Financing in Kenya.

But this was just one of the main frontline positions that the bank has taken over the years in promotion of small businesses. For example, in 2015, the bank negotiated and received Sh. 15 billion for onward lending to small and medium enterprises (SMEs) from the African Development Bank. In February 2019, the bank got Sh. 10 billion from the International Finance Corporation (IFC) to shore up the capital of its Kenyan banking subsidiary and lend to local small and medium-sized firms. “Our SME funds are tailor made to act as catalyst and facilitate transformation by increasing long-term funding required to allow micro, small and medium businesses to scale up and increase production,” says James Mwangi, the chief executive officer at Equity Bank Group. 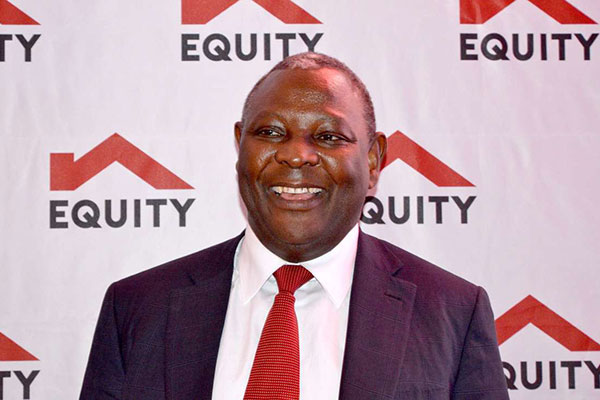 In May last year as well, Equity revealed that it had lined up Sh. 150 billion for lending to small businesses. “We are saying that Sh. 150 billion needs to go back into the real economy, to the micro-businesses and individual consumers. We are using the reduced cost of lending and reduced cost of infrastructure to be able to lend to the whole population at the lowest rates possible,” said Dr. Mwangi.

Interestingly, according to Mr. Njenga, by leading the pack in technological innovations and product improvement, Equity Bank has been positioning its shareholders for improved gains at the NSE. “Equity has been one of the few stocks that are profitably and fundamentally strong counters at the local bourse. By going digital, investors who put their money on Equity Group get improved price positions at the market, in tandem with the bank’s improved efficiencies, and profitability from less operating costs,” says Mr. Njenga.

Inside Kenya’s blockchain ecosystem: What the future holds