How I made Sh. 2.5 million net profit from melon farming in Kenya

BY ZABLON OYUGI: Melon farming in Kenya: Dropping out of school due to lack of school meant that Kariuki Musyoka had to work harder than his peers in order to earn a living. The trade he knew well then was farming and that is what he chose to venture into.

“I sat for my Kenya Certificate of Primary Education (KCPE) in 2002 at Ngeta Primary School in Mbeere, Embu County but could not proceed to secondary school as my parents could not afford the school fees. Therefore, I decided to join my mother in rice farming at Mwea in Kirinyaga County,” says Mr Musyoka.

His uncles had given his mother some piece of land to grow rice and support the family. He helped her in planting, weeding, harvesting and packaging the rice for the market. Although this was her mother’s farm, he did the job for a fee.

After working for about eight years on the farm, he saved some Sh. 30,000. He then decided to start watermelon farming of his own. A friend had given him the idea of being his own boss. He used about Sh. 4,000 to rent an acre farm, he spent Sh. 10,000 to buy seeds and the rest on labour and pesticides.

He would eventually harvest about 15 tonnes from the piece of land. He sold a kilo at Sh. 21 raking in Sh. 315,000 gross income that season. This was a good income and it motivated him to take farming even more seriously. “I was surprised that out of my little initial investment I could get such a return. This encouraged me and I decided to increase the area under cultivation of watermelon,” he says. 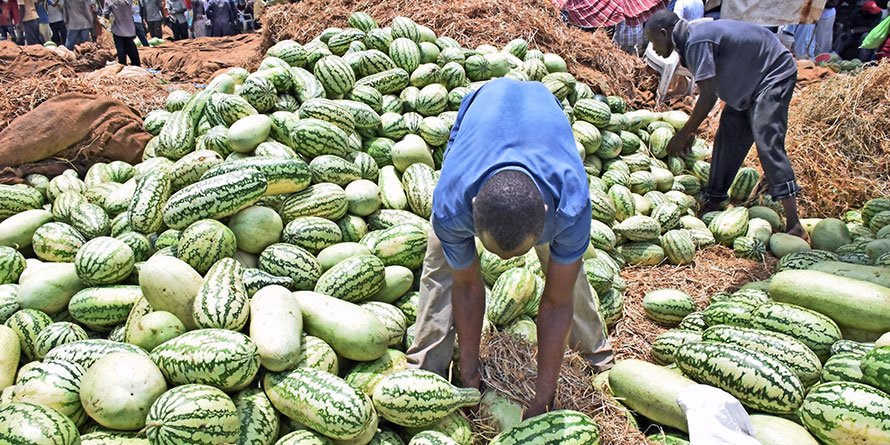 In the six years he has been farming, he has been renting 10 acres each season. He prefers either a virgin land or one that has not been used to grow watermelon in the previous season. This way, the avoids pests and diseases.

“It is inadvisable to plant watermelon in the same piece of land as this may spread diseases and pests, lowering yields. This is why I move from one piece of land to the other,” says Mr Musyoka.

He grows Sukari F1 watermelon variety which he says matures faster and is loved by consumers as it is sweeter.

“The variety matures in 60 days and most traders like it because it sells well in the market due to its nice taste.”

Currently, his fruits are estimated to be weighing between three to four kilos and he expects to harvest about 60 tonnes. He sells a kilo at Sh. 21 farm-gate price to traders who come from Kirinyaga, Kiambu and Nairobi.

According to the National Farmers Information Services (NAFIS) watermelon is a good cash crop in Kenya as it is popular in urban areas and is one of the most widely cultivated crops in the world. Its global consumption is greater than that of any other cucurbit.

“At the moment, traders are already enquiring when I will start harvesting and this gives me hope of a ready market as soon as I start the exercise,” says Mr Musyoka.

Mr Musyoka does most of the work such as spraying pesticide, irrigation and overseeing the overall production process. However, during planting, weeding and harvesting he hires casual employees whom he pays depending on the workload.
His major challenges are the high cost of pesticides and fuel.

The father of one also owns a public service vehicle (matatu) which operates on the Nairobi-Meru route. He bought the matatu from the proceeds from his watermelon farming.

He advises the youth who might have faced the same problems in education like him or who are finding it difficult getting a job not to lose hope but venture into agribusiness and “earn good money for a decent living”.