Followers of combative lawyer Miguna Miguna and those of the garrulous Gatundu South MP Moses Kuria have been treated to a rare online spat that degenerated into a grammar lesson.

The cat fight between the two outspoken politicians began after Miguna, in one of his numerous tweets, accused Kuria of being one of the “notorious cartels” in the country who have committed heinous crimes. 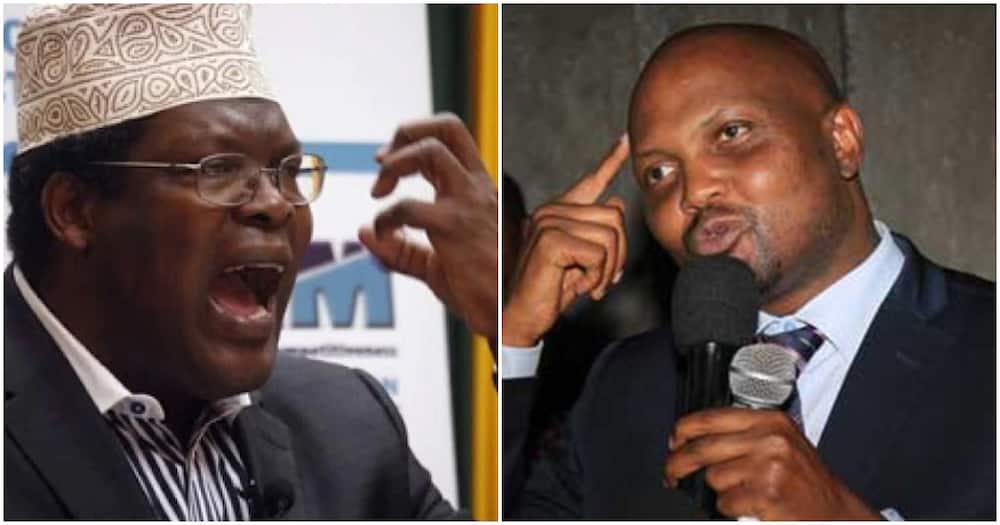 The Canada-based barrister went ahead to insinuate that the Jubilee lawmaker could have taken part in the gruesome murder of the former Independent and Electoral Boundaries Commission (IEBC) ICT manager, Chris Msando.

Rattled by the accusation, the fiery legislator responded with a chilling tweet that pierced through Miguna’s mind rekindling the awful memories of the flopped mock swearing-in of Opposition leader Raila Odinga, where the lawyer acted as a notary public and a commissioner of oaths.

“You will still swear me in. Mimi na Baba. You are just a notary public and a commissioner of oaths for the real men like me and Baba,” tweeted Kuria in response to Miguna’s post

Known for fighting back harder and unrelentingly, the exiled lawyer bombarded Kuria with accusations of having a primitive mind that would “take five new brains” to reach his level in the legal profession.

More dramatic was Miguna’s use of the word “orangutang” in his rants, a word the MP could neither fathom nor relate its meaning in the context.

Not shying away as usual, Kuria, without bothering to ask for the meaning of the word, challenged the author of Treason to confined the conversation to English language and stop using words choreographed in his Dhaluo dialect.

It is at this point that Miguna got a golden opportunity to hit the Gatundu South lawmaker below the belt leaving him dusted in a wave of social media laughs and giggles.

Orangutang or often written as Orangutan depicts images of apes native to Indonesia and Malaysia and are often found in rain forests, they resemble monkeys in appearance.

Here are some of the reactions that followed the theatrics:

How to threat a HIV positive lady I Tuko TV

Kenyan In US Missing For days Found Dead...