At the same time, Starehe MP Charles Njagua is in the soup following his utterances against foreign traders that were considered as xenophobic attacks against Tanzanian and Ugandan business people. 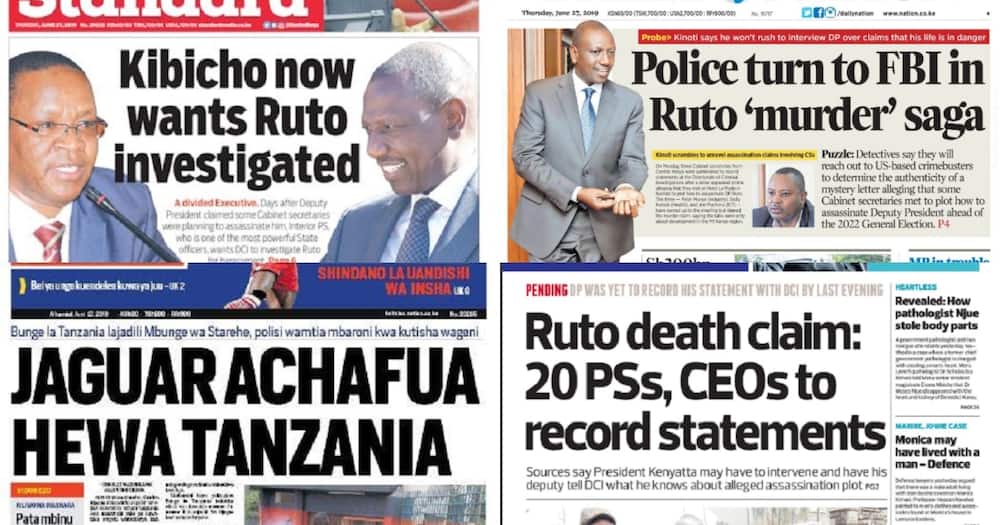 Interior Principal Secretary Karanja Kibicho has filed a complaint with the Directorate of Criminal Investigations (DCI) over what he said was continuous harassment from Deputy President William Ruto.

Kibicho was mentioned as the convener of the Hotel La Mada meeting which is at the centre of Ruto’s assassination claims and he was expected to record a statement on Monday, June 24.

However, according to sources, he went to the DCI headquarters on the evening of Tuesday, June 25, and instead of recording a statement, he filed a complaint against the DP.

Kibicho cited a recent incident in which he had an altercation with Ruto at the Jomo Kenyatta International Airport (JKIA) last month. Both Ruto and Kibicho denied that the incident happened at the time.

“The PS was at the DCI headquarters last evening (Tuesday) from 7pm to record a statement on the past events. He was giving his version on the happenings and gave details of those who witnessed the same,” disclosed a top government official aware of the development.

During the JKIA altercation, Ruto is reported to have given a dress down to the PS over what he said was a clear move to undermine him.

He accused Kibicho of frustrating him by continuously ordering county commissioners and other county security agents to stop attending functions presided over by him. 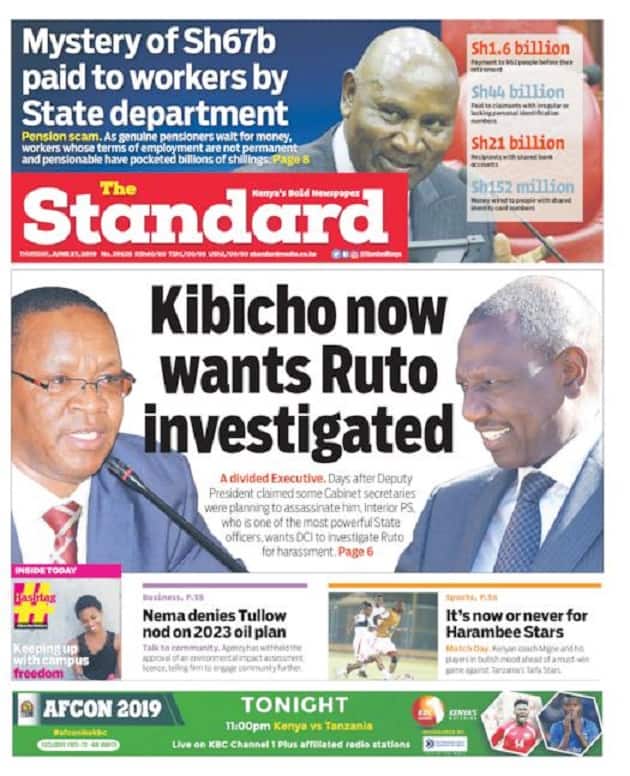 PS Karanja Kibicho has filed a complaint against DP Ruto instead of recording statement over assassination claims. Photo: The Standard
Source: UGC

The Director of Criminal Investigations Gorge Kinoti has now shifted his focus to verify the authenticity of the letter that emerged on social media indicating a section of leaders from Mt Kenya region were determined to kill Ruto before 2022 General Election.

The detectives are seeking help of the US-based crime busters from the Federal Bureau of Investigations (FBI) to help trace the authors of the letter.

Although sources privy to the investigations have dismissed the letter as fake, investigators are reported to have raided an exclusive cyber office at a location in Karen, where it is believed to have been drafted.

“A lot has been retrieved from that office. The officers are presently pursuing two individuals, who are suspected to have been behind the fake letter to cause a scare,” said an official.

One official said the letter was fake as Cabinet secretaries do not write directly to the president but rather through the head of Public Service. 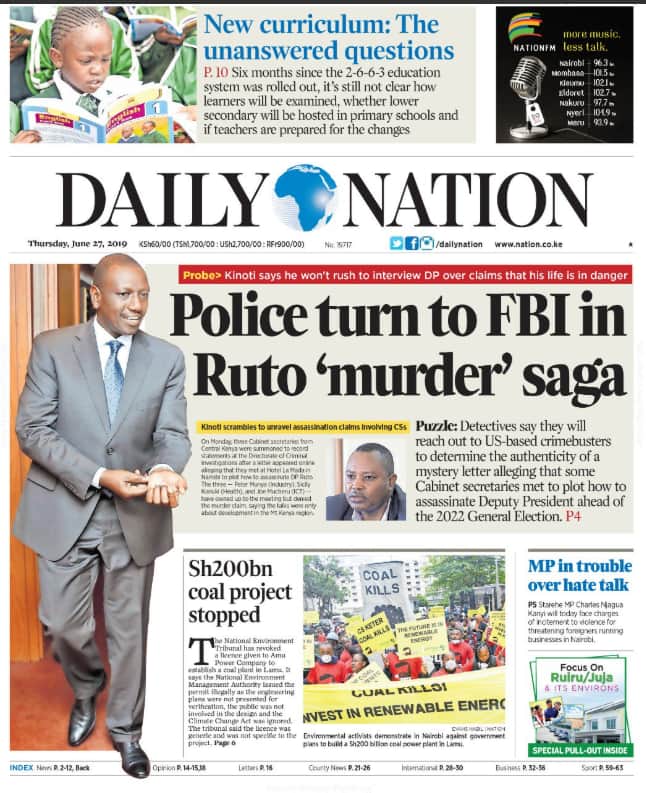 The newspaper also focused on the story around Kibicho’s statement against DP Ruto. The PS is said to have gone to the DCI headquarters on Tuesday at around 7pm and recorded a statement with DCI boss before he left at 9pm.

According to reports, Kibicho told the police that Ruto and his allies have been making statements publicly with the aim of harassing him and making his work difficult.

The PS is said to have told the police the DP is the one to blame for lack of security agents at his functions saying his office does not furnish him with details of his visits.

He said his impromptu visits have often missed security agents because he has not been having prior information about his plans. 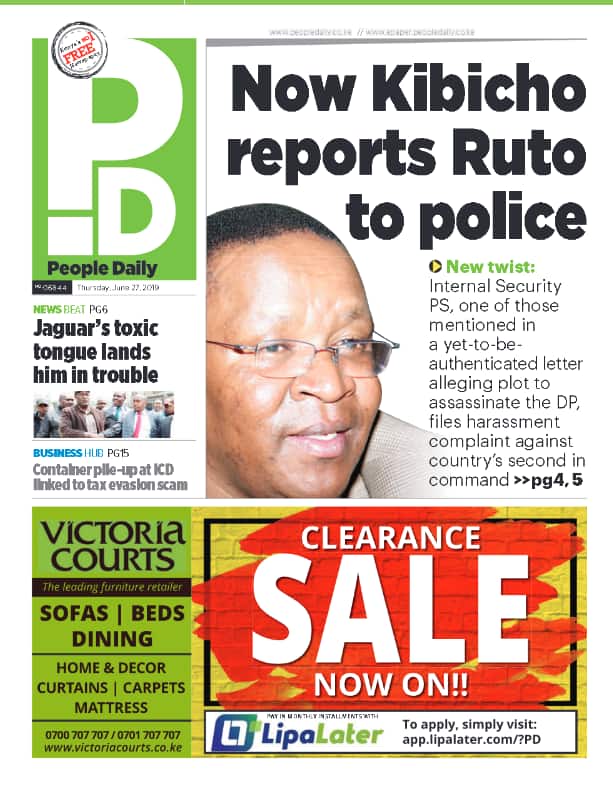 The newspaper has also focused on the story around Kibicho’s statement against DP Ruto. Photo: People Daily
Source: UGC

At least 20 principal secretaries and parastatal heads have told the DCI that they are ready to record statements over their La Mada Hotel meetings.

Although they had earlier on maintained they will only record a statement after Ruto registers a complaint against them, in this case the state will be the complainant and they will have to give their side of the story.

On Thursday, June 27, Ruto is expected to come face-to-face with his assassination plotters at the first Cabinet meeting since the allegations became public.

Sources said if Uhuru fails to make the matter a substantive agenda for the meeting, CSs mentioned as suspects would introduce it as an AOB. 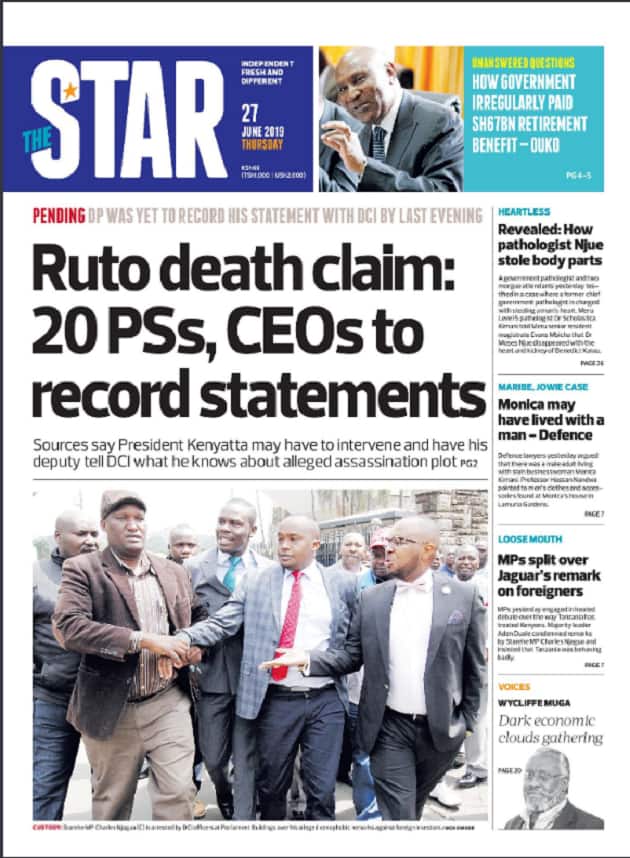 The Swahili newspaper focused on the story around Starehe MP Charles Njagua alias Jaguar which has triggered a major diplomatic row with neighbouring Tanzania.

The MP was arrested on Wednesday, June 26, over allegations of incitement through his sentiments against foreign traders in Nairobi that were considered xenophobic.

Kenyan envoy to Tanzania Dan Kazungu was summoned to Tanzania Parliament to shed more light on the issues. The lawmakers had also threatened to chase out Kenyan traders in Tanzania. 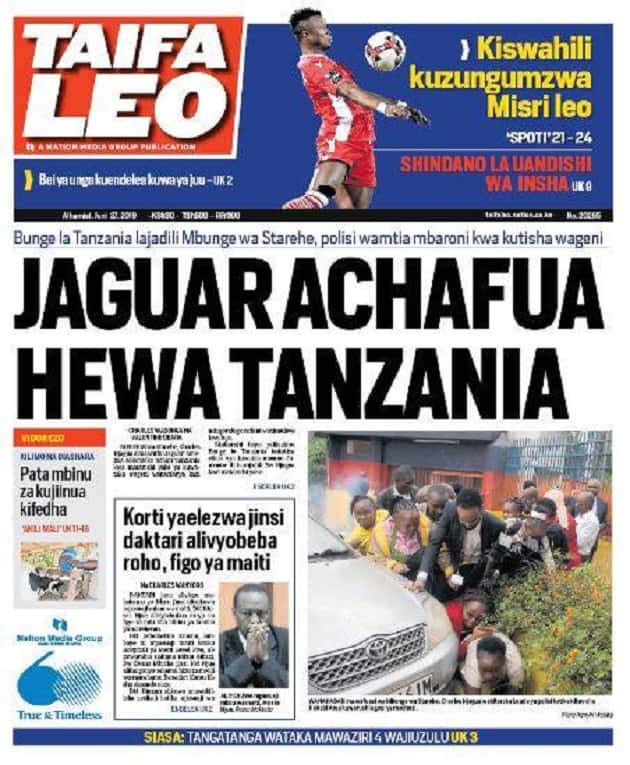