Ailing Bomet Governor Joyce Laboso is set to be transferred from Royal Marden NHS Foundation Trust Hospital in London and would be flown to India to seek more specialised treatment.

The county boss was expected to be discharged from the London hospital on Tuesday, June 25, where she had spent close to 30 days. 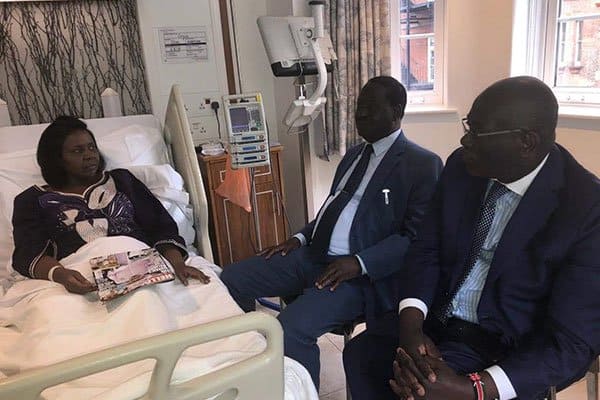 Loboso at the hospital bed when Raila visited her on June 4. Photo: Raila Odinga/Facebook.
Source: Twitter

Bomet Chief of Staff Jayne Sigilai said even though Laboso was responding well to medication, doctors agreed she be checked by another set of medics at an undisclosed facility in India, Nation reported.

“The governor is doing well but she is expected to be referred to a hospital in India to be attended to by another set of doctors,” she confirmed.

The former university lecturer has reportedly been unwell for sometime and is currently on a one month medical leave.

However, it was not a matter of public knowledge that she was out of the country until ODM party leader Raila Odinga shared the governor’s hospital photos when he visited her on Tuesday, June 4.

The former prime minister who was in London on an official trip was accompanied by Kenya’s High Commissioner to the UK Manoah Esipisu, previously State House spokesperson.