– Ruto had called the DCI to report that his life was in danger after which CSs Munya, Mucheru, Kariuki and Macharia were summoned

Led by Nyeri Town MP Ngunjiri Wambugu, the lawmakers from Mount Kenya region termed as nonsense allegations that the four CSs met at Hotel La Mada on Thika Road to plan how to eliminate the DP so they could stop him from becoming president in 2022. 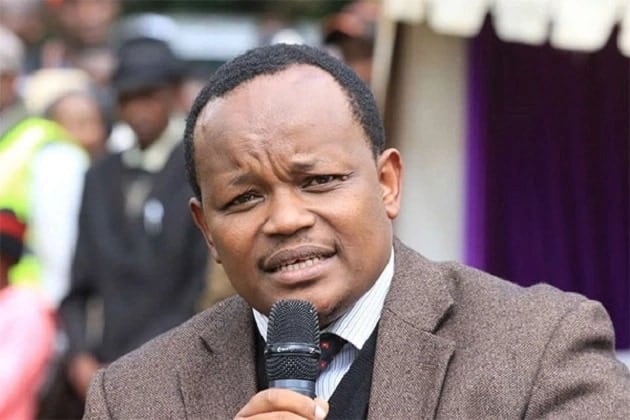 The MPs led by Nyeri Town MP Ngunjiri Wambugu accused those behind the assassination claims of trying to cause division in Central Kenya and intimidate Cabinet secretaries. Photo: Nation.
Source: UGC

Addressing the press at the Parliament Buildings on Monday, June 24, evening, the MPs claimed the assassination allegations were just but part of a well thought out political strategy to bring division in Central Kenya.

“We are convinced those behind these allegations are trying to stop the Mt Kenya Cabinet secretaries from assisting the region’s MPs to push for development of the region.

This is also meant to intimidate these Cabinet secretaries from executing decisions made by the President towards developing our region,” the MPs said.

READ ALSO: ODM says it will not share 4B political parties funds with other NASA affiliates

The lawmakers defended CSs Peter Munya (Trade), Joseph Mucheru (ICT), Sicily Kariuki (Health) and James Macharia (Transport) saying they were not planning to kill Ruto as alled, and that their meeting Hotel La Mada was meant to discuss how to bring development to Mt Kenya amid concerns the region had neglected.

“It must be understood that the meetings that CSs Munya, Mucheru, Kariuki and Macharia are being accused of holding as a result of the Naivasha and Nyeri meetings to ensure Mt Kenya gets its fair share of development projects. They have nothing to do with assassinating anyone,” they said.

The accused CSs had also denied being part of a plot to kill anyone, much less the DP terming the allegations as “wild and unsubstantiated” claims.

They equally declined to record any statement with the DCI and asked the DP file a formal complaint.

“It is a serious allegation, especially coming from the deputy president who is occupying a powerful office in this land. I would expect somebody in that office to do proper investigation before making unsubstantiated and wild allegations of that nature.

I think it is irresponsible, unfair and it intended to portray us in a very bad light, so that we look like criminals. It is also intended to injure our reputation,” Munya said while addressing the press outside the DCI offices on Monday.

The Directorate of Criminal Investigations (DCI) boss George Kinoti on Monday evening confirmed Ruto had indeed called his office to report that his life was in danger, prompting the DCI to immediately launch investigation into the grave allegations.

Do you have a life-changing story you would like us to publish? Please reach us through [email protected] or WhatsApp: 0732482690 and Telegram: Tuko News.

What keeps Kenyan Banks’ executives up at night?