He keeps 13 animals (four of them calves), 11 which are Friesians and two Ayrshires, all under zero-grazing on his one acre.

“I get from my five cows 186 litres daily, which is six times what I used to get some years back when I was keeping cows to get milk for home use,” he says.

Mukindia went into commercial dairy farming in 2014 after visiting some farms in Eldoret.

“I was part of a group of farmers sponsored by an international NGO to travel to model farms in the town. The tour was an eye-opener.”

Upon his return, Mukindia began to implement the lessons he had picked, which included on management, quality control systems, feeds and records.

“Initially, I had two Friesians, which were giving me at most 30 litres daily. I served them with sexed-semen to end up with quality heifers. I also bought two high-yielding Friesians animals at Sh200,000 each.”

His efforts paid off in a big way. 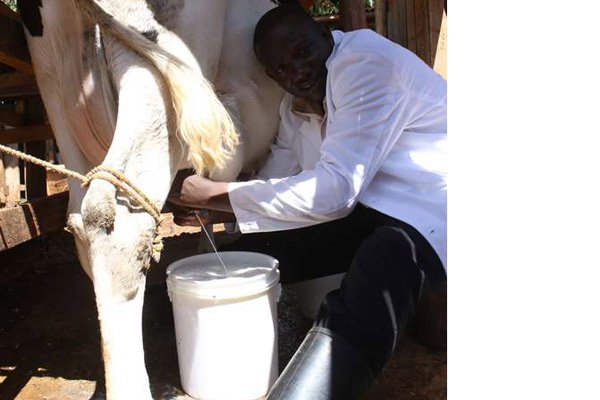 The other three cows offer me 35 litres each and I milk them three times a day, at 5am, 12pm and 6pm,” he says, adding for the two cows, they offer him 22 litres during the first milking, 10 in the second and five litres each in the third and fourth sessions.

Mukindia exclusively feeds his cows on green maize, which he has planted the DK90-89 variety that matures in three months. The maize, according to him, has high protein that boosts milk production.

On the farm he also has several bunkers measuring 6 by 11 metres each where he stores silage to feed his cows throughout the year.

“I chop the maize stalks and cobs together and leave them in the sun to dry for two days. I then add water and molasses to catalyse the fermentation process and then cover it with a black plastic bag of gauge 1,000 because the bunker should be airtight at all times.”

“The silage is then ready for consumption after 21 days. Presently, I have fodder to last my cows until September 2018,” Mukindia adds, noting silage contains 17-20 per cent dry matter and it helps preserve nutritive value of the feed.

Each of his cows feeds on 13kg of silage daily starting from 3pm to 8pm as he uses the Total Mix Ratio method, where energy fodder comprises of 70 per cent, proteins account for 23 per cent while minerals and water consist of about seven per cent.

He mixes the silage with chopped lucerne, Rhodes grass, napier grasses and calliandra. He further supplements the feeds with dairy meal.

Mukindia has ready market for his milk, selling a litre at Sh35 to Uruku Dairy Cooperative where he doubles up as the chairman. With the litres he gets, he ends up with more than Sh5,000 a day.

He feeds the four calves three litres of milk every day.

“The milk has antigens and antibodies which results in rapid weight gain as this is very important in the first six weeks of a calf’s life,” he says.

Other cash comes from farm visits, where he charges Sh. 300 per person and banana farming that rakes in about Sh.10,000 a month.

Using the money, he has educated his four children and has also bought an acre where he intends to grow maize for silage making.

Uruku is a member of the giant Meru Dairy Co-operative Union Ltd, which is the second oldest processor after the state-owned Kenya Cooperative Creameries.

The cooperative also organises annual Milk Farmers’ Day where best producing farmers are rewarded. Experts are also called to train farmers on how to produce more milk during the event.

To join the cooperative, a farmer pays a capital share of Sh600. They also contribute Sh2,000 annually for the maintenance of vehicles that pick milk from their homes and at collection centres.

To ensure more productive breeds, Mukindia’s animals are registered with the East Africa Stud Book to maintain accurate and authentic identification that include dates of birth and lineage.

Apart from using cow dung as manure, the farmer also produces biogas from a digester where all the animal waste ends up, saving up to Sh3,000 monthly that would have gone to firewood.