President Uhuru Kenyatta has issued a stern warning to Jubilee leaders who have repeatedly defied his directive on premature 2022 politics at the expense of development and service delivery to the people.

A visibly enraged Uhuru warned any leader allied to the ruling party who will not heed the calls to shelve early campaigns will face the music. 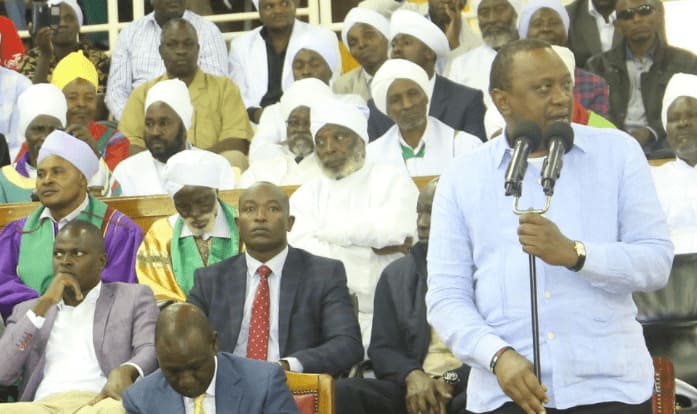 The president who was speaking during the 2019 Akorino annual conference at Kasarani Stadium, Nairobi, on Sunday, June 16, termed as “thugs” the ever politicking Jubilee leaders and warned them not to take his silence for weakness.

“When they see me remain silent, they should not think it’s because I feel threatened. I will find them wherever they are…If you are making headlines, do not think it bothers me…

I even stopped reading newspapers and using Facebook because of these rubbish,” the head of state who was accompanied by his deputy William Ruto said in acerbic speech mostly delivered in Kikuyu dialect.

Uhuru also reminded the stubborn politicians that he was not elected president because they looked for votes on his behalf and therefore he would not tolerate their defiance, adding he was not their “kihii” (uncircumcised boy).

“These thugs that we elected are busy politicking…they should not think I am their kihii (uncircumcised boy), they did not make me president, they will not stop me from constructing roads.

They didn’t look for votes on my behalf, I went looking for my votes. These rubbish should stop bothering me,” he said moments before he apologised to the bewildered faithfuls for the outburst .

This, however, was not the first time Uhuru lashed out at the leaders for endless politicking which started a few months after the president and his deputy were sworn into office for a second term.

The head of state has on a number of occasions called on leaders from both sides of the political divide to give room for development and service delivery to the people.

“Those who have chosen to keep politicking instead of serving the people should be ready to give way. There are many young Kenyans who are willing and ready to work if they felt they are not up to task,” he said at a Cabinet meeting held on January 31, 2019.

His directives were ignored as Jubilee politicians who were now split into two factions, Team Tanga Tanga and Team Kieleweke, continued to crisscross the country to push their 2022 political agendas.

Among the issues fueling the early campaigns are the renewed push for a referendum to amend the Constitution, the March 2018 handshake between Uhuru and Opposition leader Raila Odinga and the ongoing war on corruption.

Whereas the Tanga Tanga team led by Ruto believes war on graft is a political witch-hunt meant to frustrate the DP’s 2022 presidential bid, the Kieleweke camp associated with Uhuru and supported by Raila’s allies insists fighting corruption is a noble war.

The two sides have also locked horns on whether or not the Constitution should be amended and if so what issues should be focused on.

The handshake is yet another point of departure and the DP has on different occasions expressed his reservations on why he is not fully supporting the initiative, which he seems to believe could be a plot to stop him from ascending to power in 2022.

Do you have a life-changing story you would like us to publish? Please reach us through [email protected]co.ke or WhatsApp: 0732482690 and Telegram: Tuko news.

Budget: Winners and losers give their reactions

Cashew nut factory set to be opened in Mtwapa – KBC