Manu Chandaria Net Worth: BY LEE MWITI / THE STANDARD: Did you know that Chandaria Industries is actually not owned by Manu Chandaria? It is owned by Mahesh Chandaria, 60. However, the shy businessman has throughout his business life kept off the media, and instead let his uncle Manu take the limelight.

According to his flamboyant son Darshan Chandaria, Manu owns Comcraft Limited manufactures steel and aluminium products such as iron sheets and kitchenware. On the other hand, Mahesh owns Chandaria Industries whose flagship products are tissue paper and hygiene products.

“When my grandfather started this company in 1964, he never envisioned what it would later turn out to be until my father joined him a few years later and introduced the manufacture of tissue and hygiene products as our flagship products,” says Darshan.

He started by buying a single role of paper to manufacture tissue, and now, 53 years later, we are the leading tissue brand in East Africa, where we have a subsidiary in Tanzania, as well as exporting tissue and hygiene products in 12 African countries, he observes.

In the immediate years after independence, elite Kenyan families – Asian, whites and a few blacks who had achieved a choice status in Nairobi – could only rely on imported hygiene products for their upmarket homes. There were no local manufactures offering products in this area. And that was the chance Mahesh’s father saw.

No sooner had the manufacturing of hygiene products started, than Chandaria Industries began hitting a record high in revenues. But to make tissue, the company had to rely on imported paper that was quite expensive. 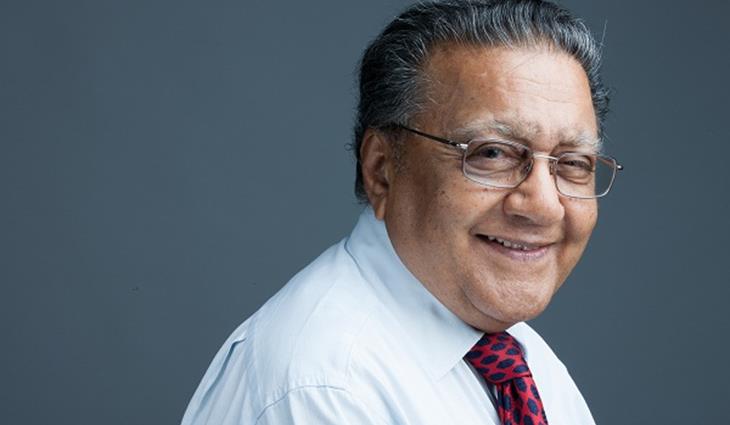 Darshan says that the idea of investing in a recycling plant to manufacture tissue paper from waste paper that was plentiful in Nairobi’s numerous dumpsites did not hit his father until 1985. “A second recycling plant was put up in 1989 and that is when waste really started making us money. Our recycling mills churn out kilos of tissue, serviettes and paper from the non-plastic paper waste that collectors bring through our gates from dumpsites allover Nairobi,” Darshan says.

Apart from getting waste from dumpsites, Darshan noted that Chandaria industries has entered into a partnership with several companies as well as the United Nations and the US embassy to supply it with waste paper for recycling, getting free waste paper in the process. But a rather riveting revelation from Darshan catches me in awe. Chandaria industries is the only company in the region that is entrusted, even by sensitive State agencies to destroy documents and information within minutes. “Yes we do destroy documents. The Central Bank of Kenya (CBK) and other State agencies bring us printed information which we destroy in our recycling plant,” Darshan says.

The Mahesh-led Chandaria family has not made its billions of shillings from the recycling business alone. Years after the family got into tissue and hygiene products manufacture, the evasive patriarch Mahesh stirred it into other money-minting sectors such as banking, real estate, mining and car manufacture.

“Our real estate venture, Chandaria Properties is our fastest growing segment. The Chandaria family owns a significant real estate portfolio in Kenya, India and Dubai. We also have a partnership with Tatu City where we will be developing Properties,” Darshan claims. On top of this, Chandaria Industries wants to start a brokerage firm which will help property owners rent and sell property to potential customers.

Darshan avers that the latest portion in Chandaria’s empire, is a venture capital initiative which has seen the Chandarias take up an undisclosed stake in Mobius Motors, the Thika based start-up auto firm that is building Africa’s cheapest car. “The low-cost vehicle market in Kenya is growing and we want to be a part of it,” Darshan divulges.

The billionaire family also got into a strategic partnership with Barclays Bank of Kenya to buy First Assurance, a bacassurance model firm which offers life insurance policies through the Barclays banking model.

Darshan says the business empire that his father and grandfather have struggled to build and foster, has not gone without a battering. Recent government policy decisions have had a bad impact on Chandaria businesses. The high cost of manufacturing especially high electricity costs and huge capital demands when it comes to the purchase of industrial machinery and other equipment have weighed in heavily on Chandaria Industries.

Chandaria Industries, the manufacturers of the velvet toilet paper, Nice and soft napkins and serviettes Royale facial tissues, Azhar printing paper, Rosy sanitary pads, among other hygiene products, were on Thursday last week awarded the Superbrand status. This is as Kenyan brands continue to edge up the pan-African brand ladder, cutting a niche in the global markets.

The firm which has spread its footprint across the region by establishing recycling plants in Tanzania and Uganda said Rwanda, Dr Congo, Mozambique among other 12 countries form its core export market. It announced Thursday that it will be entering the Malawi market in a broad expansion plan. To be named a Superbrand, you must satisfy brand recognition targets in independent consumer surveys, to show they have achieved the position of household names. But what has greatly rattled the Chandaria ‘clan’ is the recent announcement of plastics ban by the State which his company heavily relies on. “I understand that the main concern is eradicating the use of the plastic bags which are considered a pollutant. But the government should look at its own internal structure of waste management,” Darshan said.

“You can ban use of consumer carrier bags. But banning industrial use of the bags could make companies such as ours shut down. Our competitiveness with neighbours like Tanzania and Uganda will go down.” When asked about how much his family empire his worth, he, without batting an eyelid asserts: “We are a family owned business we don’t reveal that.” Manu Chandaria Net Worth. Manu Chandaria Net Worth.

Leave me and my boss alone