– His father, David, said his son had developed a psychological problem and needed help

The father of Jomo Kenyatta University of Agriculture and Technology Fifth Year mechanical engineering student who was shot while trespassing to State House says his son was suffering from mental illness.

Brian Kibet Bera was shot on his left arm at State House grounds after he defied an order to stop and instead drew a knife on a security guard on Monday, June 10, at 4.05pm.

His father, David Bera, said his son has been in and out of hospital severally after he exhibited subtle signs of mental illness, as reported by the Standard.

“In June last year, Brian was admitted to Reale Hospital in Eldoret town for two weeks. After diagnosis, it was established that he had a brief psychotic disorder,” said Bera, who displayed a discharge form from the health institution.

The medical sheet indicated Brian was diagnosed and found to have a problem with his speech, behaviour and was violent. He required psychoeducation/ family therapy.

“After being discharged from hospital last year, his condition improved. He even requested to go back to school to complete his studies and was never taken for medical review as required,” the father said.

After the shooting incident, Brian was booked at Kileleshwa Police Station and thereafter taken to Kenyatta National Hospital for treatment where doctors established that the bullet had exited through his back.

As earlier reported by TUKO.co.ke, the student had indicated he was determined to trespass into State House based on a Facebook post he made prior to the incident in which he claimed God had sent him to execute an alleged unknown “thief” and all his accomplices.

“Thief President Uhuru Kenyatta and his partners. Tomorrow I attack State House. God has sent me to execute judgement on every thief and every partner of a thief. From Prince Of Ethiopia, formerly called Brian Kibet Bera,” he sensationally claimed in his now deleted Facebook post.

It was that post that caught the attention of his close family members and friends who tried to reach out to him. He was defensive of his actions and even went ahead to block some of the callers including her sister Vivian Bera, a university student in Eldoret. 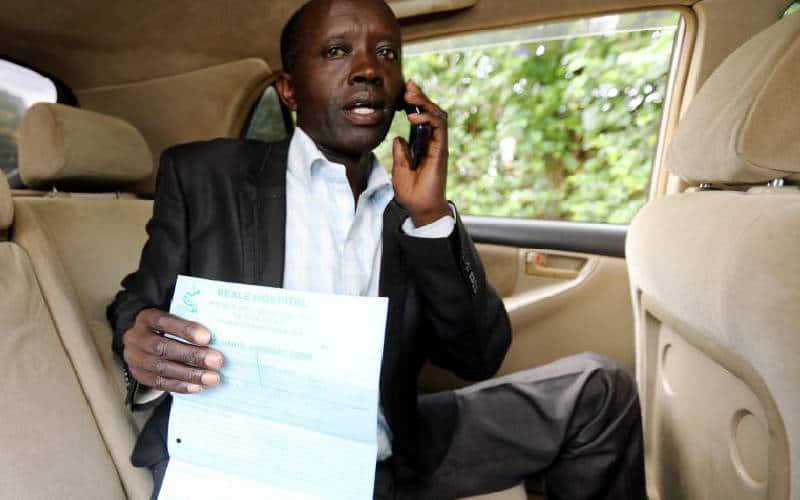 David Bera said his son has been in and out of hospital severally after he exhibited subtle signs of mental illness. Photo: Standard
Source: UGC

READ ALSO: Radio presenter Annitah Rey sensationally claims it is not mandatory for children to send money to parents

“After blocking me, he never picked my calls. This was after I started questioning why he was making alarming posts…He requires psychiatric treatment,” said Vivian, who insisted that her brother was not a criminal.

Bera painted a rosy picture of his first born in a family of six. He said he was among the top students at Kitale School where he scored 407 marks in Class Eight which earned him a place at Nairobi School where he managed a straight ‘A’ in the KCSE exams.

“In 2016, we started observing changes in him when he was at home. He became withdrawn and started keeping to himself most of the time. He was also suddenly very negative about life and everything,” said Bera, who is a tutor at Ol’lessos Technical Training Institute.

He said he realised his son’s problem had escalated in February 2018 when he received a call from a police officer in Naromoru Police Station where he was informed Brian had been arrested after he was found inside Mt. Kenya National Park.

“I received a call from the area OCS that my son had been arrested and I should go pick him up from the station. Brian told the rangers who arrested him that he was on his way to the top of Mt Kenya,” said the father.

He picked his son and took him home and immediately started seeking help that saw him visit several local hospitals and even herbalists.

His behaviour changed as he started isolating himself from the rest of the family and most of the times remained locked up in his room reading or when free visiting nearby Mt Elgon Forest and caves near their home in Kitale.

Those who questioned where he was going his standard response was that he was more at peace with nature.

Bera said in June 2018, Brian went missing only to later get a call that his son was in Athi River town with his cousin. The relative told him that Brian was ‘mildly’ violent.

“My son has never been involved in any form of criminal activities since his childhood. In fact, he is among the most obedient, honest and brilliant children with no known case of drug abuse. He is a member of SDA Church.

“My plea to the Government is not to prosecute my son because what he did was a mental case. Brian is sick and what he needs is proper psychiatric care. Taking him to court is subjecting him to more anguish,” the father pleaded.

The university’s chief corporate communications officer Hindzano Ngonyo confirmed the institution was aware of the student’s problem and he was receiving psychological help.

“He was among the students who were being attended to by our university staff from the counselling unit,” said Ngonyo.