-The white giraffe is the only one in the world

The Kenya Wildlife Service has given Kenyans great news after a very long time.

The institution recently excited many after announcing the rare white giraffe is heavily pregnant and expecting to pop out an offspring anytime from now. 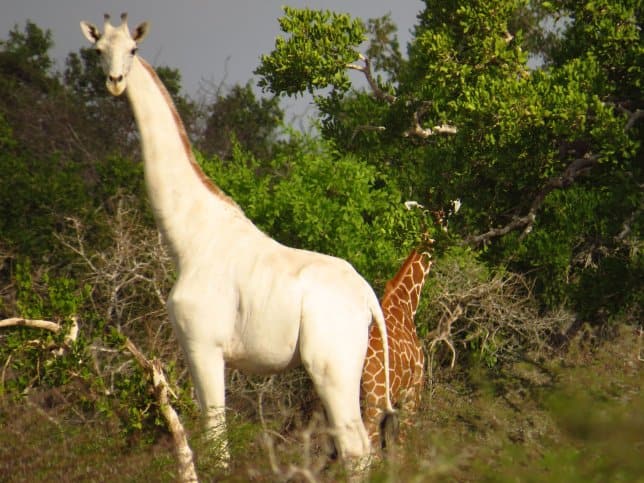 The white giraffe gave birth to a male calf back in February 2017. Photo: Metro.co.uk
Source: UGC

In an Tweet, KWS revealed the white giraffe based at the Ishaqbini Hirola Sanctuary in Ijara sub-county, Garissa county is expecting its second calf.

“Having birthed a male calf in Feb 2017, mama giraffe is again expectant,” the conservator tweeted.

The mama giraffe gave birth to a male calf back in February 2017 and everyone had been hopeful she would give birth to yet another one.

TUKO.co.ke has learnt the Ishaqbini Hirola Sanctuary is not only home to the rare white giraffe but also the critically endangered Hirola Antelope.

Following the announcement, Kenyans took to Twitter to take pride in the feat and prayed for the white giraffe’s safety even as it awaits delivery.

As earlier reported by TUKO.co.ke, the rare animal was spotted with its calf in Garissa county in 2018.

The two unique giraffes were first seen by a villager, who immediately alerted wild life conservationists from Hirola Conservation Programme (HCP) in Garissa.

According to HCP, the extremely rare type of giraffe actually suffers from a genetic condition known as laicism, which is like albinism in humans.

However, there is a slight different between laicism in giraffes and albinism in humans.

Laicism, experts say, is caused by reduction in multiple types of pigment.

Albinism, on the other hand, is caused by absence of melanin.

Do you have a life-changing story you would like us to publish? Please reach us through [email protected] or WhatsApp: 0732482690 and Telegram: Tuko news