– The passenger vehicle was headed to Nairobi from Kakamega where it left on Saturday, June 8

More than 60 passengers narrowly escaped death on Sunday, June 9, morning when a bus they were travelling in en-route to Nairobi from Kakamega rolled over at Ihundu near Kinungi black spot along the Nairobi-Nakuru highway.

The Sunday morning accident left at least six people seriously injured and more than 40 others with minor injuries according to police report. 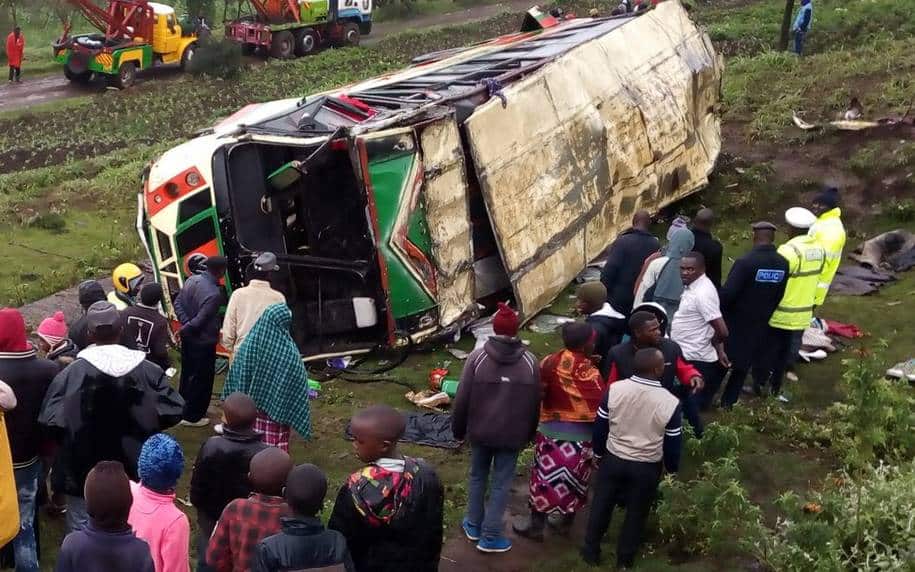 The bus left Kakamega on Saturday, June 8, en-route to Nairobi but rolled over at Ihundu near Kinungi black spot along the Nairobi-Nakuru highway. Photo: K24.
Source: Twitter

Confirming the incident, Naivasha OCPD Samuel Waweru said they were looking for the driver of the ill-fated bus who reportedly fled the scene following the accident.

According to the OCPD, those injured in the accident were taken to Naivasha sub-county hospital where they are undergoing treatment.

The wreckage of the bus named Mbukinya was towed to Naivasha Police Station as investigations commenced.

Some of the lucky passengers blamed the accident on the driver who they accused of reckless driving, including being under the influence of illegal substance and speeding.

The passengers narrated the vehicle left Kakamega on Saturday and all was well until they arrived in Nakuru where another driver described as young took over the steering.

It was alleged the new driver was smoking what many of the passengers suspected to be bhang while speeding and ignored numerous pleas to slow down.

Kartelo’s sweet message to his mother – On Tuko TV

What You Need To Know About Online Gambling...